The Princess takes on Tofinoooooooo!

We always knew Addison had a devilish streak, but as she gets bigger and bolder, it has morphed into definite daredevil tendencies. She is usually quite fearless, though usually not reckless. Our pediatrician explained it as the survival instinct…it’s present even in the very youngest. Well, I was quite dubious when, while casually strolling around the main drag of Tofino (or Tofinooo as Addison calls it), Aaron said, “Hey there is a little bike park!” And proceeded to lead our not-even-3 year old daughter and her run bike over there. 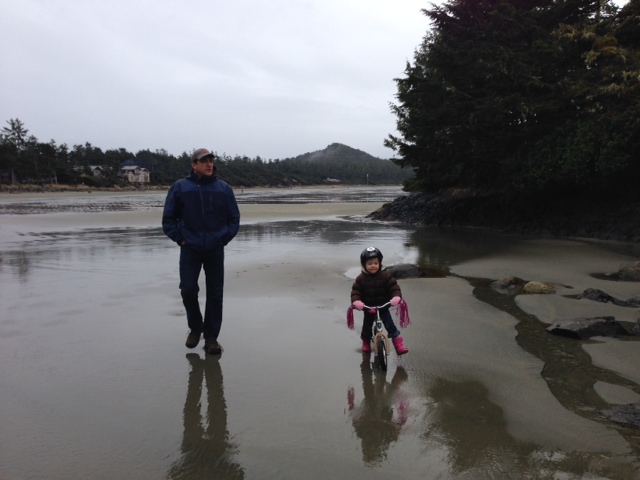 WHAT? And how is this a good idea?? Sure she took a little cruise around the Whistler kids’ bike park back in September, but that park was designed for little kids and was built on dirt. The one in Tofino is concrete. I took solace in the fact Addison had her helmet on and a puffy winter jacket for extra padding.

Well, I stand corrected. Princess Daredevil couldn’t get enough. There was a section designed for beginners and once she mastered those ramps, grinning crazily the whole time, she pointed to the advanced area and said she wanted to go down there. We are going to be in a world of trouble!

I pictured our long weekend in Tofino as one big relaxing beach stroll, but apparently more skateboard/bike park time is on the agenda tomorrow. We did get a chance to show our little girl the very spot where we got married, on Sunset Point at Pacific Sands. She said to me, “That’s where you were wearing the nice dress!” Then she wanted to get back on her bike. The Princess has spent the rest of the time tearing up and down the beach of Cox Bay. With plenty of sand dollars for the picking, she doesn’t seem too interested in going to a new beach. That’s ok. It’s all awesome out here.

6 thoughts on “The Princess takes on Tofinoooooooo!”