What a way to celebrate #CanadaDay150 – with some serious bling at the #WTGMalaga2017! #organdonation 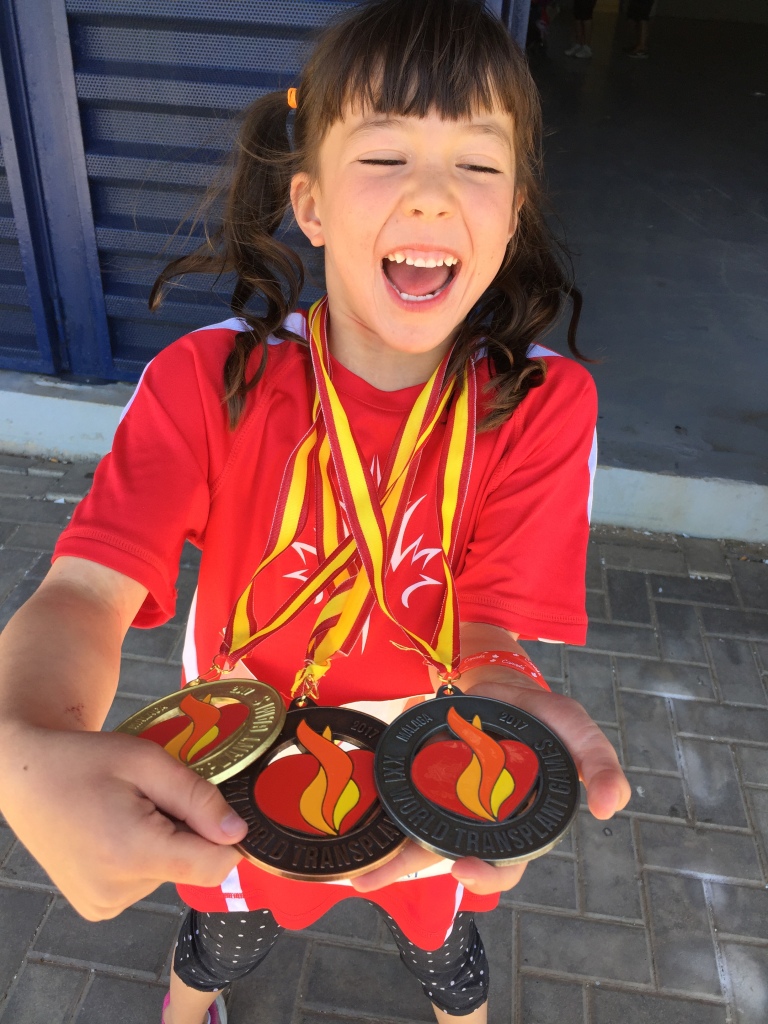 We are now in Barcelona, enjoying the perfect weather, beautiful architecture, lovely walking streets, delicious food, and endless beach promenades. These are the last few hours of our month long McYong tour around Spain and it has been another epic adventure. But the obvious highlight was our week in Malaga at the World Transplant Games. Addison is coming home with three medals – the 50 metre run silver, a bronze in long jump and gold in ball throw. As she excitedly exclaimed after winning the final medal, “Now I have one of each colour!”

On Saturday, Canada Day and the final day of the WTG, we had to be at the track by 7:30am for Addison’s long jump. After her disqualification from long jump at the WTG in Argentina for stepping over the line at every jump, we have been working hard on getting her technique down. This time, she made every jump!! Wahoo!! 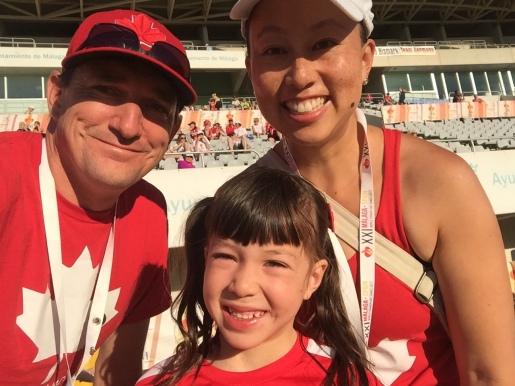 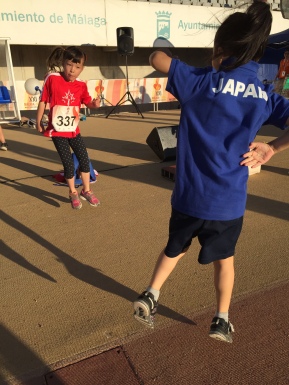 Dance warm up for long jump with her new friend from Japan. 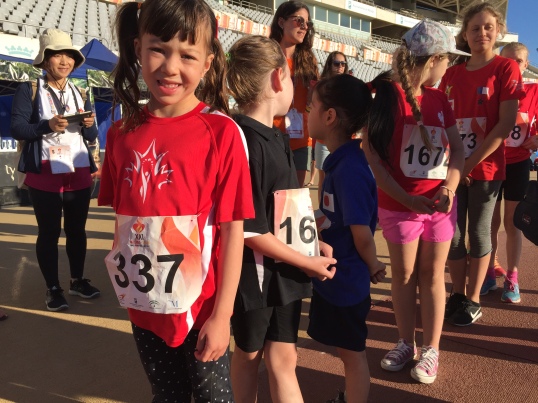 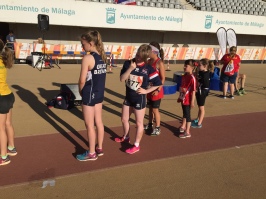 All the girls jumped together so Addison was lined up with the bigger girls.

But the event that is nearest to her heart is ball throw. Addison and Aaron have been practising a lot. Up until a month before we left, ball throw training was hit and miss, literally. There were tears of frustration, stomps of “I can’t do it!”, and a few moments of joy in between. Then they figured out a technique that works for Addison. I won’t even bother describing it but let’s just say when I saw the girls from Hungary throwing at the WTG, Aaron and I looked at each other and laughed. Addison has the Eastern European ball throw technique down pat, and it certainly works for her. Her winning throw was a metre longer than her other two little competitors!! Addison was so proud of herself. She said she really wanted to win gold at this one because she worked so hard on getting better. What an awesome feeling to see your child reach her goal, with a lot of perseverance and a little luck. Proud parent moment!!!!

At the end of it all, there is only one reason Addison and her 2000 fellow athletes are even able to run, jump, bike, swim, bowl, play tennis, golf or kayak. The gift of life from their donors. And the ultimate way to show that gift isn’t going to waste is getting out there and using it. In Malaga, the young, old, everything in between, whether they were uberfit bodybuilders or the complete opposite, each one a survivor of a life-threatening illness and a transplant surgery, scars proudly on display, out there giving it their all. It was incredibly inspiring and moving. There were several beautiful tributes to the donors during the week and many tears as we remembered how fortunate we were to be there. We are so grateful to our donor Audrey and her mom Felicia.

On Saturday night as we said good-bye to our fellow Team Canada teammates and our new and old transplant friends from around the world, it was a little sad, tinged with uncertainty. Not to sound morbid, but you never know what lies ahead, especially when you’re a transplant recipient. We can only hope to see all our friends again at the next WTG in 2019 (though we haven’t decided if we will go yet) in good health. That’s the reality of life after transplant. 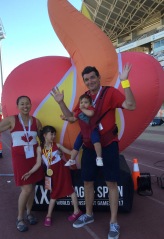 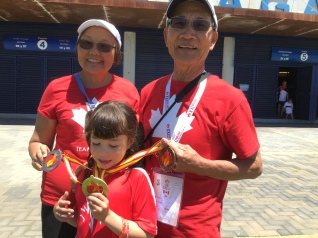 So our Spanish adventure is quickly coming to a close. We have one more full day in Barcelona before heading home. A bike tour, ice cream, beach and the McYong version of a city bus tour (going for a 1 Euro ride on public transit LOL) are on the agenda tomorrow.

3 thoughts on “What a way to celebrate #CanadaDay150 – with some serious bling at the #WTGMalaga2017! #organdonation”